And the Holiday Sweatshop Continues

I hope everyone had a lovely holiday season, and a happy new year! 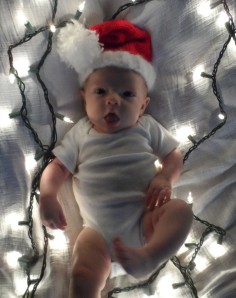 We had fun playing with the lights 🙂

While I did finish a fair amount of knit gifts, including that sweet Santa hat Little Sheep is modeling for us (It was a simple 2X2 rim hat, where I put 3 rows between each decrease row.  And obviously, change colors accordingly, and add a fun pom-pom on top!), the holidays continue on at our house in the form of unfinished objects.

Still on the needles:  two cowls 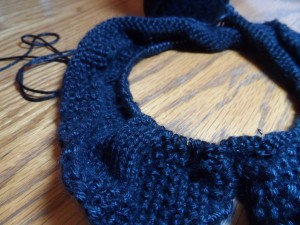 This one is being worked flat, with a seed stitch border.  When it’s done I’m going to sew the ends together, and attach some BIG buttons.  Not useful buttons mind you, just satisfyingly HUGE ones 😀 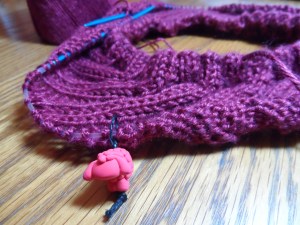 This cowl is knit in the same Swirl Hat pattern I’ve used before.  The only difference… instead of decreases, I’ll just put a few more rows of 2X2 rib.  Done!  (It’s also showing off my prototype Lazer Sheep stitch marker!) 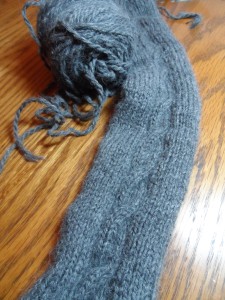 This is a special scarf for my husband.  I sprung for some super soft baby alpaca.  Should have enough to make a matching hat as well.  I just stuck a basic cable in the middle.  My husband is a man, and his scarf should be manly as well.  No frilly stuff here.

One pair of fingerless gloves 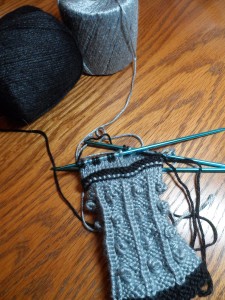 These I found on Ravelry, for my Dr. Who obsessed friend.  The pattern, The Oncoming Storm! They are modeled after the Daleks, villains in the show.

You’d think being home all the time I’d have plenty of spare time to finish up this knitting and get them off to their final destinations.  Too bad the Little Sheep doesn’t like watching the knitting needles go as much as I do.

How many projects do you have yet to finish?

On a totally separate note, I’m working hard to get the Lazer Sheep Etsy shop up and running this month.  The yarn is all set to go.  The stitch markers on the other hand, are slow going.  The idea is that each colorway has their own Lazer Sheep character, and I want to send a stitch marker with its character out with each hank of yarn.  Through trial and error, I have a few ideas.  Hopefully I can get enough of them done to be ready to ship with this batch of yarn.  Since I’ve managed to hijack my parents’ computer, I’ll try to keep updated.  (I’m here every other day for laundry any how.) 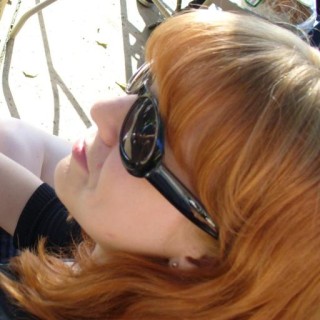